March 26, 1942 – September 5, 2022
In loving memory ~
George Stirling Watt passed away, peacefully at home in Courtenay B.C. on September 5, 2022, at the age of 80. He will be greatly missed by his wife of 56 years, Anne, sister Carol Cochrane, sons Jeff (Carrie) granddaughters Audrey and Meredith, and Dan (Andrea) and granddaughter Isabella as well as many friends and family who remember his kindness, generosity and outgoing nature.
George was born in Simcoe, Ontario, son of Ken and Marguerite. He grew up in Port Stanley on Lake Erie, where his family had a commercial fishing business. So many fond memories he had, of that village and his childhood there.
In August 1962, George began training at Depot in Regina, initiating a 35-year career with the RCMP. The first 24 years were spent in F Division, where postings included Regina Town Station, Strasbourg, Indian Head, Moosomin, three consecutive summer postings to Regina Beach, Rose Valley, North Battleford, Loon Lake, Tisdale, and Melville. He received his commission in 1986 and was posted to E Division as AOC Courtenay Subdivision. Then off to K Division in 1989, OIC Grande Prairie Detachment, and finally to D Division as OC Thompson Subdivision, as it happened, he was custom made for the job, he was kind and fair, hardworking, and fun loving.
George retired in 1997, but within four years he realized he was happiest when employed. As luck would have it, Walmart came to town and he was hired as a Greeter in August 2001, working for 20 years until illness forced his retirement in August 2021. He was made for that job, too!
Leisure time was spent enjoying his family/grandkids in Edmonton and Burnaby, occasional trips to Ontario, summer trips to the cottage in Saskatchewan, and he walked everyday chatting up the neighbours along his unvaried route. He also enjoyed target shooting and sporting clays at the Rod and Gun Club, his Jeep Wrangler and jigsaw puzzles.
Diagnosed with brain cancer in late July last year. Speech aphasia was the worst and most frustrating symptom, but he accepted it and the progressive course of the disease with grace and courage.
Our family would like to thank Dr. Isabelle Vallieres, Radiation Oncologist at BC Cancer Centre in Victoria for her unfailing guidance during this journey, Dr. Stephen Matous and Dr. Maria Chow for their help managing symptoms, Nancy Diedericks O.T. for her exceptional dedication to George’s comfort, the Palliative Care Nurses for their proactive care planning and the personal support workers, for their compassionate care and kindness. We are forever grateful to you all!
Arrangements are being made to inter his ashes at the RCMP Regimental Cemetery in Regina.
If desired, memorial donations may be made to brain cancer research or to a charity of your choice. 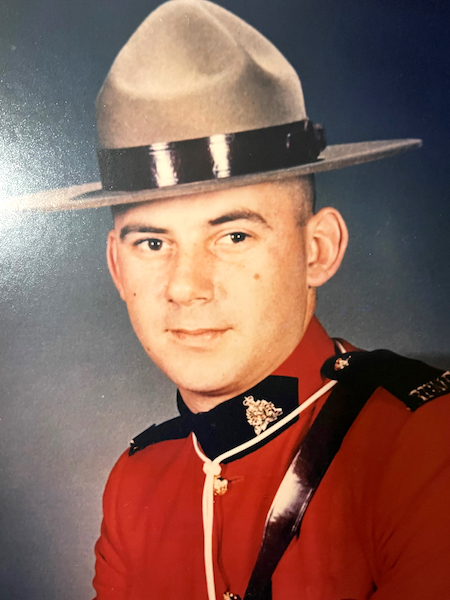